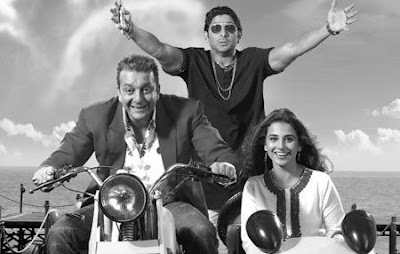 Lage Raho Rajubhai!!! Yes the man behind this great movie, Rajkumar Hirani’s timing could not have been more perfect. When violence has become an everyday affair in India, when Gandhian Ideology has been thrown into the gutter, this Gandhigiri of his makes a perfect attempt to revive those golden principles which helped our grandparents attain freedom.

Recently movies like Legend of Bhagat Singh and Rang de Basanti have made us realise the importance of the armed revolutionaries. However while doing so, most of these movies maligned Gandhiji. For eg, how in Legend of Bhagat Singh, Gandhi is shown criticising Bhagat Singh at many occasions and he has been reduced to a petty self centred politician. These movies are undoubtedly among my all time favourites, but Lage Raho Munnabhai has rejuvenated my faith in Bapu. After all there was something about him which made him one in a billion.

Well I’ll leave the critical analysis of the movie for the hundreds of media persons who survive on it. My concern here is the increasing public unrest in India. The candle lighting protest at India Gate after acquittal of Jessica Lal murder Case convicts was a direct consequence of RDB. But how many times do these protests remain peaceful?

A protesting mob on rampage, lathicharge by police to break it up, people injured and manhandled, another protest against the ill treatment and the saga goes on and on.

There are situations when this mob behaviour is expected as after Meerut fire, Srinagar sex scandal or recently the Hisar Sex scandal but in other cases its just deplorable. For instance, what happened on Bangalore streets after legendary Rajkumar’s death or how Vadodra municipal demolitions were given unnecessary communal colour was pathetic.

Who is driving this mob? According to sociologists the mob behaviour is very peculiar. It’s very easy to drive it towards a negative direction. It might be made up of individuals but when it acts, that individual factor is succumbed.

It gives us a lot of pleasure when we see a mob giving a judgement on some villainous politician and thrashing him badly. However, in real life, implications of such behaviour might not be that good. Most of these mobs are driven by goons who have their own personal motives behind such violent acts.

What I mean to say is that this unrest which has set in is being vented in a violent manner. What happened in Lorento school thanks to nationalist Hindu fanatics is another example. However, with an unprejudiced opinion I also condemn the act of Christian missionary which led to this situation.

So at such times it’s the Gandhigiri which gives me the last hope. I am not an extreme preacher of non violence but Lage Raho Munnabhai brought me closer to it. The movie is made to touch every single heart. RDB was a revolutionary movie but I feel in present scenario a movie like that will just add unnecessary fuel to the fire. It did its magic but now its time for a transformation into satyagrah.

To settle this unrest there should also be decisive steps taken by the government. The need of the hour is to generate a common goodwill through massive programmes. A national committee can be formed out of different religious and socialist Gurus to look after such programmes. These Gurus can do a lot good if they strike the Evil in a united way. Its time for them to convert what they preach into practicality. Moreover public figures from sports and entertainment can also be included. As I said Mobs easily follow a leader and if this leader or rather a group of leaders lead them together in a positive direction, it will generate a massive force to subside this unrest.

There is also a need to curb the reason which results in this resentment. That is the removal of corruption and injustice. Here again Gandhigiri can play an important role. I agree that real life is different from the reel life. Changing a corrupt officer might not be that easy as shown in the movie but as Gandhiji said "Keep trying and be patient."