I am an atheist; I have lost interest in offering prayers or visiting temples. However, being atheist doesn’t make me a non-Hindu. I don’t see Hinduism as a religion but as a way of life, the Indian way of life.
Historically, for foreigners the Hindus were those who resided beyond the river Indus. They were the citizens of Hindustan.
Hinduism is an eternal cultural revolution. It is known for its openness and has always adapted itself since the Vedic ages. New influences, ideologies and cultures have arrived from outside and many new have taken birth within this region but Hinduism has always embraced them and coexisted with them.
When the Vedic way of life or Brahmanism was threatened by the liberal ideologies of Buddhism and Jainism, it adapted itself and rejuvenated within some centuries. It sustained the rule of Islamic rulers in the medieval ages and even forced Islam to adapt itself to the Hindu way of life.
There is no scope of so called fundamentalism in Hinduism as Hinduism never propagated any fundamentals. Stop confusing Hinduism with the ancient Vedic religion and look at it with an open mind. I believe in this brand of Hinduism.
So when people talk about reviving the old glory of Hinduism, they are just fighting a personal battle with vested interests. Hinduism is forward looking and not backward looking.
It was this backward looking tendency that made some maniacs destroy one place of worship to erect another in 1992 to correct an alleged wrong committed in 1528. Because of this one act, India has bled again and again in the last two decades. The covert actions of Pakistan are not as much responsible for the Islamic brand of terrorism as these politically motivated acts of violence which are claimed to be spontaneous outbursts of the population.
And now, those who want to turn a blind eye to a new brand of Militant Hindu Nationalism or don’t want to see it as a big threat are just giving into the wishes of these backward looking ideologues who want to tarnish my faith, my Hinduism.
In the Image:
A confluence of rivers. Just like it, Hinduism is a confluence of various ideologies, cultures and traditions.
Image Courtesy:
http://gallery.nen.gov.uk (original)
Author: Vipul Grover at Friday, December 24, 2010 20 comments: 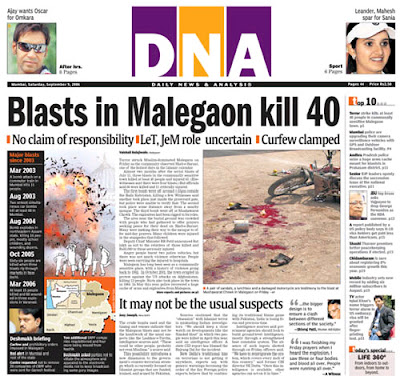 Since long I have been thinking about returning to serious blogging and last week an issue did come up which presented that opportunity. However, thanks to my laziness, I kept procrastinating but finally I am here dishing out my humble views on the issue which has created a slight furor in the political arena though the rising onion prices has relegated it to the back burner. Nonetheless, it is an issue which will keep returning and haunting this country.
Wikileaks which was turning out to be an embarrassment for the American government reached the Indian shores with the news that the Yuvraaj Rahul Gandhi thinks that Militant Hindu Nationalism is a bigger threat to India than the terrorism being perpetrated by militant outfits like LeT.
Do I agree?
Well, Yuvraaj ji, though I hate Dynastic politics and hence I am no big fan of yours, still I agree with this statement of yours because I tend to think objectively.
First of all, Rahul never said that Islamic Terrorism is not a threat to India. In absolute terms it definitely is and one should note that during the above mentioned candid admission of Rahul to the US Ambassador, he had also admitted that there is evidence of some support for LeT among certain elements in India's indigenous Muslim community too. Maybe, this statement lost its importance in the entire furor created by the other big statement.
According to Rahul, it is on relative terms that Militant Hindu Nationalism becomes a larger threat to India. But then one will argue, can we quantify the threat while talking about terrorism, whichever hue or colour it might be having, here ofcourse green versus saffron.
Definitely, you can’t. Terrorism in any form is equally threatening. So why do I say Rahul is right?
It’s important to look at the overall consequences of the actions perpetrated by Militant Hindu Nationalists and the situation arising from such violent polarization of the society. It is this situation that poses a bigger threat and that’s what Rahul meant when he spoke those words.
How am I so sure if this is what he meant?
Well, because I hold the same views and hence, somehow I can gauge the sentiments behind the statement.
Opposition keeps accusing Congress of indulging in Muslim appeasement. However, the fact remains that appeasement never leads to actual upliftment of the community being appeased. Hence, the situation of Muslim community remains as abysmal as it was. Findings of Sachar Committee Report substantiate this fact.
Ofcourse, the community feels cheated by both the sides, those who allegedly appease and those who accuse them of doing that. In such a scenario, certain sections within the community are definitely going astray. However, to catch hold of these sections is not that difficult for the simple reason that they are a minority within a minority and those responsible for catching them largely come from the majority community.
Then why they don’t get caught is a different story linked to the so called minority appeasement by those in power. Anyway, without going off topic, I must tell you why I brought this up.
Now think of the terrorist activities being committed by those who comprise a minority within the majority, i.e., Militant Hindu Nationalists. Here sympathies of those responsible to catch them might hinder them from doing their duty. I am by no means questioning the honest police officials but then there are black sheep in their ranks and frankly, many of them as we all know.
What happened in Gujarat is known to all. You may keep on prolonging the investigations but the horrendous stories that came out couldn’t be someone’s figment of imagination.
Hence automatically, militant activities being committed by those sections which come from the majority community become bigger threat.
The polarization it creates is even bigger as now the minority community tends to feel even more insecure and hence, those from amongst them supporting groups from across the border increase in proportion.
The situation can only worsen from here.
It is this situation being created by the Militant Hindu Nationalism that is posing the biggest threat to India. The terrorism from across the border can be tackled by the mere patriotic conscience against it but that being bred in the name of religion within the country by the majority community may go out of hand.
So to sum it up, Militant Hindu Nationalism is a bigger threat to India’s integrity than the Islamic Terrorism being perpetrated from across the border. Period.

Off the Topic Reflection:

In a class some days ago, I was discussing similar issues with the students. There was one student who kept negating my stand on little being done for Muslim community and threat from Militant Hindu Nationalism. To some extent it was irksome but overall he was a very intelligent and responsive student. While taking the attendance, I realised he was a Muslim.

Before leaving the class, one student asked me that what is the biggest example of secularism in India?

Though, I just replied that it is the fundamental right to freedom; I actually wanted to say, see how I, a Hindu is accusing the successive governments of doing little for the Muslim community and talking about threat from Militant Hindu Nationalism and this student, a Muslim is constantly negating me.

Militant Hindu Nationalism is the biggest threat to this very secular fabric of my nation.

In the Image:
A news report about Malegaon Blasts (2008). The investigations led to the unmasking of the ugly Militant Hindu Nationalism.
Image Courtesy:
www.dnaindia.com (original)
Author: Vipul Grover at Wednesday, December 22, 2010 20 comments: