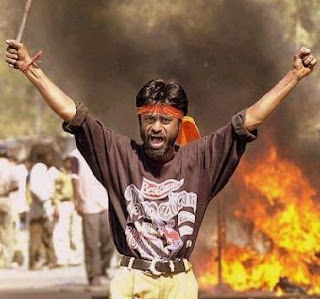 It is a pretty popular form of writing having been employed by great literary geniuses like Edgar Alan Poe and Lewis Carrol amongst others. I got introduced to it recently by a new Blog-a-Tonic, Nishali Chand.
I hope you liked it. However, more importantly, I'll not like to dilute the message in this poem with this literary gibberish.
Can any kind of violence be justified in the name of religion?
Image Coutesy:
http://theviewspaper.net (edited)
Author: Vipul Grover at Sunday, April 11, 2010