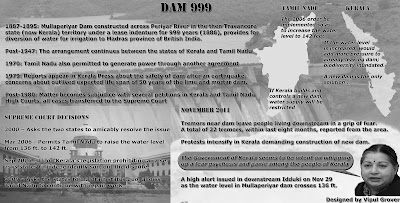 Meanwhile, Supreme Court, while asking both the states not to politicize the issue, has decided against Kerala's demand for reduction in water level from 136 ft. to 120 ft. Tamil Nadu Government must not regard this as a victory but help in restoring peace and normalcy in the region.
If steps are not taken to redress this issue at the earliest, any untoward incidence will be a blot on India’s federal polity.
Image Courtesy:
Self-designed
Author: Vipul Grover at Thursday, December 15, 2011

Political parties will never stop politics on issues of national importance.Both the states are aware of what is right and wrong,but are reaching out their respective constituancy.
In my opinion,Dr Kalam's suggestion is scientific and issues relating to water should be left to him to be solved.

I have been away from blogger world and blog-a-ton for long.

Your thoughts on the Mullapperiyar issue is much appreciated, it being from a person who is not a Kerala resident. (Or, am I wrong here?).

We, Keralites, sitting on a water bomb, don't care about politics. This should be considered as an issue of national importance and a dire crisis at hand.

Chowlaji, I am not sure if u'll be reading this comment bt in case u end up doing sumhow, I'll like to know which suggestion by Kalam u talking about??
Well, its sad how politics is being played on this issue.. u r spot on..

Hi Nasrajan.. really nice 2 c u.. u r right, i m not a keralite but hail frm chandigarh.. bt as i m in chennai these days pursuing a journalism course, i m well aware of issues tht r in news and cover thm myslf as college assignmnts..