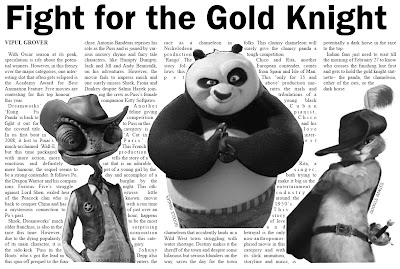 Click on the image to read my take on the five nominees of  Academy Award for Best Animation Feature 2012 or go further to read the complete text without straining your eyes. (I am not paying for your laser surgery.)

With Oscar season at its peak, speculation is rife about the potential winners. However, in this frenzy over the major categories, one interesting slot that often gets eclipsed is the Academy Award for Best Animation Feature. Five movies are contesting for this top honour this year.
Dreamworks’ ‘Kung Fu Panda’ is back to fight it out for the coveted title. In its first bout in 2008, it lost to Pixar’s much-acclaimed Wall-E, but this time packaged with more action, more emotions and definitely more humour, the sequel seems to be a strong contender. It follows Po, the Dragon Warrior and his companions Furious Five’s struggle against Lord Shen, exiled heir of the Peacock clan who is back to conquer China and has a mysterious connection to Po’s past.
Shrek, Dreamworks’ much older franchise, is also in the race this time. However, due to the dying popularity of its main character, it is the side-kick ‘Puss in the Boots’ who’s got the lead in this spin-off prequel to the franchise. Antonio Banderas reprises his role as the Puss and is joined by various nursery rhyme and fairy tale characters, like Humpty Dumpty, Jack and Jill and Andy Beanstalk, on his adventures. However, the movie fails to impress much and one surely misses Shrek, Fiona and Donkey despite Salma Hayek joining the crew as Puss’s female companion Kitty Softpaws.
Another feline giving competition to Puss in this category is ‘A Cat in Paris’. This French production tells the story of a cat that is an adorable pet of a young girl by the day and accomplice of a burglar by the night. This otherwise little known movie with a run time of just over an hour, happens to be the most surprising nomination in this category.
Johnny Depp also enters the race as a chameleon in Nickelodeon production ‘Rango’. The story follows this pet chameleon that accidently lands in a Wild West town struggling with shortage of water. Destiny makes it the sheriff of the town and despite some hilarious but serious blunders on the way, saves the day for the town folks. This clumsy chameleon will surely give the clumsy panda a tough competition.
Chico and Rita, another European contender, comes from Spain and Isle of Man. This ‘only for 15 and above’ production narrates the trials and tribulations of a young black Cuban pianist, Chico and his love interest Rita, a singer, both trying to make it big in the entertainment industry around the 1950’s. This story of love and betrayal is the only non-anthropomorphised movie in this category and with its slick animation, storyline and music, is potentially a dark horse in the race to the top.
Indian fans just need to wait till the morning of February 27 to know who crosses the finishing line first and gets to hold the gold knight statuette– the panda, the chameleon, either of the cats, or the dark horse.
Author: Vipul Grover at Friday, February 24, 2012

For the sake of your life, I couldn't leave without commenting!!