Going back to the masses 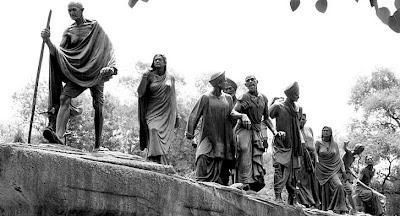 A new democratic experiment in U.K.
It was Mahatma Gandhi who realized the importance of masses and engaged them in the fight against discrimination in South Africa. On returning to his homeland, he successfully replicated the model on a much larger scale, which played a decisive role in helping India attain freedom. However, once the job was done, the masses chose to disengage with the politics and allow their representatives do the dirty work. It was quarter a century hence, when Jayaprakash Narayan decided to bring the masses back to the center stage from the wilderness. JP must have succeeded for that made those in power act irresponsibly and plunge the country into the darkest years of Indian democracy, the Emergency.
The politicians still need the masses to get into power but they have learnt all the tricks to deceive and exploit them for their own good. So while the poorer lot still oblige these men by attending their rallies and turning up at the polling booths to vote for them, the not-so-poorer lot prefer voting for reality shows and television surveys, rather than at the general, assembly or local elections.
A new model of engaging the masses has been developed in U.S. by Barack Obama. He made the best use of information technology and communication to form a decisive democratic force of masses which heralded him to the post of the most powerful man in the world.
Taking a cue from all this, a new democratic exercise is being experimented in U.K. I read about it just now in an article by Hasan Suroor in 'The Hindu' and I could not wait but share it with others. If you remember the recent 'Lead India' Campaign of Times of India, then this new experiment in U.K. is just taking such an initiative to its logical conclusion.
A campaign has been launched in the name of 'The Jury Team', which according to its website is a political movement created with the goal of making politics more accessible, politicians more accountable and political institutions more transparent. According to their mission statement, this campaign is against the current political parties that have turned the Government into an Oligarchic institution, a small and increasingly distant group.
This is how the campaign operates- Anyone interested in a political career can put themselves forward through The Jury Team’s website but they must agree not to support any policies that discriminate on the basis of race, colour, gender, sexual orientation, disability or religious or other belief. The general public will be able to vote for their favourite candidate by texting the code of that person to a “unique” text number. The selected candidates will then be fielded as Independents. Moreover, these candidates once elected, would be free of the party whip, i.e., they won't be obliged to follow the dictats of their party but will be independent to vote for the proposals for legislations as they wish to.
This campaign has been launched and funded by millionaire Sir Paul Judge, however as mentioned on their website, they rely on donations to keep running.
The question is for how long can such a non-party party, a term devised by Sir Paul, can remain a non-party. Isn't there every chance of egoism of such people coming in way of high principles set initially. On the first thought, such an experiment will have a chance to survive only if such an individual distants himself from it with time, to allow the masses take it forward, but on a second thought, wont this campaign just wither away if it doesnt get the support and direction of a strong personality.
Moreover, in a country like India which finds itself divided on the lines of religion, caste, region and ethnicity, where the so-called National Parties are being dictated terms by the regional ones, where still the majority doesnt vote for an ideology but for a bottle of country made liquor, where still only a small minority find access to modern technologies, can such an experiment even survive one election. These are the questions that spring once the reality dawns. However, they can be answered only when the experiment has been conducted.
As for the initiative, the best source seems the Indian media. They were so active post-Mumbai carnage, driving their individual campaigns against politicians. It will be interesting to see if they have it in them to do what they preach. As for the initial funding, the media houses can oblige their 'high class' chatterati to donate some bucks, who love to come on the discussion shows and spank the Indian politics and the politicians and then share a glass of wine with the same politicos at their evening parties.
Recently, in India new initiatives are being taken as we see a number of unconventional political parties springing up. There was a technocrats based Lok Paritran and recently an IIM-IIT graduates based political outfit. In a Punjab district recently, the members of the Market Association decided to field their own candidates as they felt, the political parties always forget them after taking donations for their election campaigns. However, rather than coming together to obtain a critical mass, such parties prefer to do it alone. Maybe, with time they realize the importance of united action.
India which has adopted the parliamentary democracy and many of its conventions from U.K. might also give a try to this latest experiment though its still to be seen if it makes any mark in the country of its origin itself being in nascent stages there too.

First of all why r u so pecimistic man.....?
If Sir Paul is taken an initiative to bring a new era of politics to choose one among us by us , and experimentiong on it why we apprciate the thought.
if we think abt the cons b4 we take the inititatve to encourage the thoguht, how the new ideas will reap into ACTIONS?

meenakshi, i dont think um being pessimistic in this post.. if u read it carefully um just showing the two sides of the coin.. Moreovr, the only reason i'v blogged about it is tht this initiative really impressed me! As i write in the end, India shud expriment with it too!