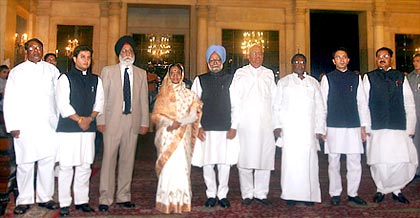 Today, with swearing in of 59 more ministers into the Union Council of Ministers, its total strength reached 78. This gigantic number which has seen one in every four UPA M.P.'s getting the ministerial berth, is still lower than the constitutional ceiling of 15% of the total Lok Sabha membership(presently 543), set by 91st Constitutional Amendment.
In the era of downsizing of governments such a political maneuvering seems too luxurious but this happens to be a part and a parcel of the representative democracy, we all are fondly proud of.
Since casting my vote on 13th, I've not commented on election results nor have I revealed my choice of candidate. Well, my posts were becoming too politics oriented that I decided to write on some other topics before I return to politics. Hereby, I declare that the candidate I voted for and the party he belonged to, both got vanquished at the constituency level and the national level respectively, by the Congress+. So which party I voted for is not that difficult to guess if you have read my previous post on Elections 2009.
However, in the victory of Congress, I don't see any personal loss as more than grieving over the loss of the party of my choice, I am celebrating the loss of the opportunist regional parties(like RJD, LJP, SP, BSP, TDP, JD(S), AIADMK among others) and more importantly the Left parties. In the above mentioned previous post of mine, I had emphatically favoured a national party's coalition coming to power and that's what has happened thankfully.
Moreover, the number of seats Congress has amassed independently this Lok Sabha election, has given it a chance to form a very strong and decisive Government, relatively less hassled by the pushes and pulls of coalition politics which has effected the Central Governments for quite some time now. With the stability of Government, strength will follow as a necessary corollary and that's what India requires at this hour. However, Congress should handle this positive mandate responsibly and refrain from despotic practices that were so common during the life and times of Indira and Rajiv Gandhi. 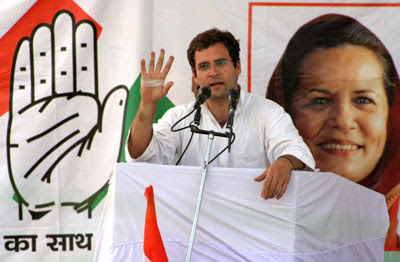 One aspect about which I had commented in the previous post and which still disturbs me is with regards to dynastic politics. The Congressmen have the tendency of attributing all their successes to the wisdom and leadership of Sonia'ji' and Rahul 'baba' (Dr.Manmohan Singh hardly finds a mention) while finding scapegoats within the party cadre whenever things go wrong. Such a sycophancy and dynastic politics is not just limited to this party but is deep rooted in the Indian political landscape across the parties of all hues and colours(DMK presenting the best or rather, the worst example of the same in the present context).
One of my fellow blogger as many others, has praised the junta's mandate for electing the youngsters like Sachin Pilot, Milind Deora and Jyotiraditiya Scindia in addition to the 'prince' Rahul Gandhi. In this mandate, they find the victory of youngistan. This is what I had to comment on this particular post of her.

"Queen, prince...????? Are we living in a Democracy or a Kingdom? Indian masses have given Congress the mandate, so I have no right to question it. However, the likes of Rahul Gandhi, Deora, Pilot and Scindia whom you have so emphatically mentioned as future of India are there not just because of their personal 'qualifications' but because of their surnames. These princes may be good at their work, however there are many others who might be better but don't get a chance because they are 'lesser born'. True victory of 'Youngistan' will take place when just any youngster can dream of making it big in politics without the backing of their family names."

Today, India got it's youngest minister in Agatha who is just 28 and was sworn in as a Minister of Sate. However, wait for her surname before rejoicing; its Sangma. Yes, she happens to be the daughter of veteran parliamentarian and former Speaker, P.A. Sangma. Along with her many sons, daughters, wives, nephews and grandchildren of politicians took the oath of secrecy today.
I hope with a maturing democracy, this dynastic politics withers away with time. However, looking at one of the oldest democracy in the world, things don't look like moving in that direction. In U.S.A., if Hillary Clinton had managed to get the Democratic ticket and defeated John McCain in the presidential race, that country would have seen two families holding the Presidential post between them for 24(or maybe 28) years. That didn't happen but could happen. So, no one's immune to 'Dynastic Democracy' you see.

Wow....78 ministry posts is just waaaaaay too many. And why are people like Vilasrao Deshmukh even getting a cabinet position when they've been clearly kicked out of their own state positions due to gross incompetence??

1(PM) + 78(COM) is a big number indeed.. jus 2 short of permissible limit. We can just hope the new govrnment justifies such a big team by giving an efficient, economic and effective administration.
As for Vilasrao Deshmukh(my persnl views dont matter), can u really question the PM whn the people thmslvs brougth Congress back into power(Congress and allies swept all 6 seats in Mumbai-the epicenter of terrorist attacks and its aftermath which saw Deshmukh resigning frm his CM post).
And as far as your bothering is concernd u hav the right and the duty to bother about whats going around u, be it society, economy or politics of ur neighbourhood, city, state, country or whole world. so keep bothering because only thn u cn think of solutions nd execute ur thoughts:)