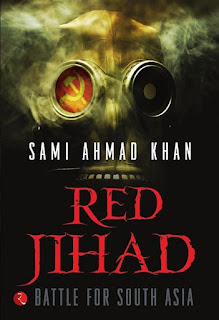 Dan Brown got inspired to write his debut novel ‘Digital Fortress’ (1998), in which protagonists raced against time to save the world from a possible annihilation, after the thrill he felt upon reading Sidney Sheldon’s ‘The Doomsday Conspiracy’ (1991).

It is a similar thrill that Sami Ahmad Khan tries to generate in his debut novel ‘Red Jihad’. To a Stanley Kubrick fan, this novel might seem a rip-off of his cult movie ‘Dr Strangelove’ (1964), itself based on a novel, ‘Red Alert’ (1958).

It’s year 2014; India and Pakistan are moving away from external prejudices and trying to set their house in order by throwing the Naxalites and jihadis within their respective countries into the abyss. To resurrect themselves, India’s biggest threats to internal security come together to take over the national defence agency’s research centre and unleash Pralay, India’s just developed experimental intercontinental ballistic missile, on the subcontinent. Things get murkier as the plot unfolds.

Sami keeps readers on their toes with a fast-paced narrative. A few interesting ideological discourses, now and then, add weight in terms of substance. Some characters are painstakingly introduced, only to be killed the next moment in order to accentuate the ‘shock factor’.

The same meticulousness, however, is absent in case of many characters who play much more significant roles. Use of technical jargon, especially related to defence equipment, without proper explanation, also leaves the reader stranded at times.

Nevertheless, Sami’s sound hold on language and a decent research, other than the underlying suspense and twists in the plot, make 'Red Jihad' a good read on a lonely night or a boring train journey.

I saw there are no comments up here and i can imagine your pitiable plight now without the dosage of your medicines....lol! so here ya go. hope you Get Well Soon Vipul!

Thank you so much! Really rich content and very useful information. I found my problem’s solution starting over here.
http://www.foodsteplearning.com |

It's worth pointing out that MVC is the MVC that we know from desktop apps and can be applied to client-side easily.
http://www.icelandautorental.com |

I have been waiting for someone to share this post. This has actually made me think and I hope to read more. Thanks a lot for sharing with us.
gdnet.co.uk |

Every good is always in my sight, and if I know how to choose fun or not is the new thing to say. Come with unblocked, abcya or titanfall or xbox one. have fun.
.xbox one | unblocked games | ABCya 5 games

The article you have shared here very good. This is really interesting information for me. Thanks for sharing!
Happyroom2.com Tosstheturtle.net Catmariogame.com

Data RecoverySoftware Installation
I have learned a lot from this post which will help me in future.Wifi troubleshootingPrinter setup


Movers and packers in mohali

Indian Skirts is one such category that has all the aesthetic appeal and earthy glamour of Indian textiles.
The indian saris, like so many other textiles, gives the lie to the hierarchical distinction made between fine arts and crafts.
Art is a way of expression and these shawls reflect India’s true heritage. Situated in the lofty Himalayan Mountains, Kashmir is India’s valley of dreamskashmiri shawls
this section offers a collection of signature pieces in Buddhist Jewelry, curated with an eye for beauty and rarity

We are popular as Florist Service in Gurgaon from last 10 Years, we also offers fresh flowers cakes and latest gifts across Gurgaon. Send flowers

online and Offline from flower shop for your loved ones and availlable for corporate gifting with fastest delivery.

I admire the person who wrote this post, you are so talented, hope you will promote them and become more successful. I do not feel sorry for taking the time to read this post, it is really nice and useful to me, thanks for posting it.
friv Games free 2019, Jogo para menina, playing friv games juegos, cá koi mini

We find lots of learning after reading this very useful article .

We find lots of learning after reading this very useful article .

Thanks for sharing this informational blog.tutuapp