In the World of Words

A flashback and the review of my humble book-collection
Reading has been my passion, if I might not be exaggerating, since I learnt how to read. Moreover before I learnt to read, I remember insisting my sister to read stories for me from ‘Chandan’ , 'Chandamama' or fairy tales kind of stuff, to much of her disappointment for she never liked reading anything outside her course books. My parents saw this zeal in me and introduced me to ‘Tinkle’. Growing up with Supandi, Shikari Shambhu, Tantri the Mantri, et al was great fun. Uncle Pai was a true hero for me. Alongside this weekly, my father also used to get S.Chand’s European Classics abridged versions for me from the Second Hand bookstalls. So I can proudly claim to have read Shakespeare, Mark Twain, Charles Dickens and others extensively though in petite abridged form of course. This was definitely a great learning experience. Lives of 'Tom Sawyer' and 'David Copperfield' fascinated me, I sympathised with 'Huckleberry Finn' and 'Oliver Twist', and got saddened when 'Don Quixote' and 'Hamlet' died. Sometimes, I ventured out on the ‘Journey to the Centre of the Earth’ and at other times I had to be content with going ‘Around the World in Eighty Days’. Well, I also hunted down the treasures of ‘King Solomon’s Mines’ and the ‘Treasure Island’ with quite an ease and a lot of fun.

Enid Blyton and her children stories, which I read in original form, were too mesmerizing. She had the ability to take you into that world of joy and adventure from where you never want to return. Her ‘Children of Cherry Tree Farm’ trilogy is definitely one of the best collections of children books.
Meanwhile as I was moving close to secondary school, I got another source for quenching my thirst in the form of my School library. Here, eventually my interest grew in the suspense and thrill genre when I lay my hands on Hardy Boys. I identified myself with Chet Morton, the closest buddy of the brothers and hence was always part of their adventure in the world of my imaginations. I remember returning home with the newly issued ‘Hardy boys’ novel having already read a chapter or two in my bus ride back home, gulping up the lunch and getting back into the reading mode till my mother pushed me out of the house, to play in the evening. Till, I got through my Matriculation, I had devoured dozens of Hardy Boys, Nancy Drew, The Famous Five (Enid Blyton), Alfred Hitchcock’s ‘The Three Investigators’ et al.
My years in Senior Secondary never gave me a chance to develop my reading skills further, for in those two years, I was stuck in fat and ugly books of Physics, Chemistry and Mathematics. Moreover, during the first year in the engineering college, I was so busy enjoying the new found freedom that I lost touch with that joy I used to have with Frank and Joe Hardys and others. 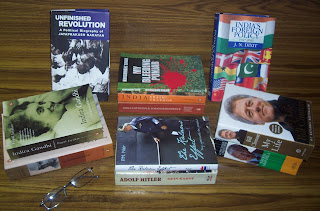 It was only when I brought home Hitler’s 'Mein Kampf' one day; out of curiosity of knowing the tyrant better, I finally had a reunion with my old passion. And with this I also had a major shift in taste from Fiction to Non-fiction. The book consists of two volumes (I have read only the first) written by Adolf Hitler in captivity during early 1920’s. It gives you a first hand experience of what was going through the mind of fuehrer which made him the man he was. There are parts where you are amazed at his intelligence and analysis through which he can convince you on things which are abhorable. No doubt, the book served as his propagandist tool in brainwashing thousands of Germans and arming them with guns pointing at their compatriots. However, if it were not for this autobiography, it would have been difficult to know him that well. I don’t think that a biography could draw such a picture, for it would have been totally subjective depending upon the author’s inclination.
So a question arises that what source should one refer to, in order to know a person better, a biography or an autobiography. As far as the former is concerned, I have read those of Indira Gandhi and Jayaprakash Narayan. Both, ‘Indira Gandhi’ and ‘Unfinished Revolution’ have been written by their close associates Pupul Jayakar and Ajit Bhattacharjea respectively. Moreover, I purchased both of them together. I got interested in knowing about these two antagonists of history on watching ‘Biography of Nehru family’ on ‘History Channel’ some years backs. In it there was reference to the Emergency period which made me yearn to know more. For me the rule of Indira Gandhi was quite foggy for all the developments like Emergency and Operation Blue Star tended to converge as I could not distinguish between them. After having read the two books, I was saner and I saw how, even a democracy can turn into autocracy thanks to the strong will of a person and her son, and the poor will of her sycophants. It was a disturbing but informative account. Pupul Jayakar though a close friend of Indira Gandhi is very objective in her narrative. On the other hand Ajit Bhattacharjea sticks to a positive narrative of his lead protagonist. Hence, it seems there are no dark shaded in JP’s life. That thing apart, life of JP is indeed inspiring. It is quite revealing that this true Gandhian had also taken to violent means to attain independence, earlier in his life. Though today, very few youngsters may know about him, but his legacy remains in the vast breed of politicians who nurtured under him. It has been aptly commented about him that he was the best Prime Minister that India could not have.