"In a continent of mindless growth, it is the thinking man's city."

That's how Times Magazine described Chandigarh in a recent issue, including the 'The City Beautiful' in the list of Asia's 15 best urban retreats. It was yet another distinction for the city of Jawaharlal Nehru's dreams and Le Corbusier's vision.
My family's association with this beloved city dates long back. My paternal grandparents, originally post-partition refugees from the Multan area of Pakistan, were amongst the first to move to the newly incepted city in the mid-1950's. My father, the eldest of their four children was just three years old at that time and others had not taken birth yet. I've spent 24 years of my life in this city and still yearn to stay as long as possible.
Once dubbed as the 'city for the senior and retired citizens', it has come a long way. However, its basic serene and pleasant tenor still persists and that adds to its aesthetic beauty. However, it has expanded in area and population just like any other city. While the size of the original city's residential part has more than doubled, its municipal boundaries extend much further. Moreover, taking into account the satellite towns which have developed around it, the combined area is many times the original planned city. An interesting fact to mention here is that Chandigarh's satellite towns of Panchkula(Haryana) and Mohali(Punjab) have been elevated as full-fledged districts of their respective states.
Chandigarh is divided into 'egalitarian' units called sectors, each representing theoretically a self-sufficient entity with space for living, working and leisure. Over the time, the profile of these sectors has also changed immensely. For example, Sector 26, originally known for the 'grain market' and educational institutions, today boasts of the best and most expensive restaurants in the city. Then there are the three southernmost sectors 48, 49 and 50 (not the part of original two phased plan) which were once nothing but barren or agricultural land, today are the most densely populated areas of the city, thanks to the burgeoning cooperative housing societies.
However, the original city created under the first phase has retained its essence all these years. For example, the gardens situated in the column of Sectors 1, 3, 10, 16 and 23 (and beyond, collectively called the Leisure Valley), known as the 'lungs of the city' have been conserved despite the increasing population pressure. I and even my father have resided in this part of the city all our life.
Chandigarh originally consisted of 24 sectors, Sector 1 to 25. If you are confused by this anomaly let me clarify that there is no Sector 13 in the city. Here is an indicative plan of this part of the city, the city's 'historic core'. 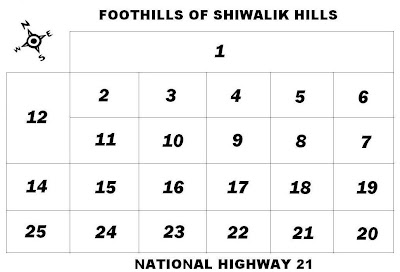 P.S. Sector 1 houses the Secretariat, Legislature, the High Court of Panjab and Haryana (these edifices are collectively known as the Capitol), Rock Garden and Sukhna Lake. Capitol has been called as the 'head' of the city by Le Corbusier. Continuing with this biological analogy, he has called the City Centre (Sector 17 Plaza) as the city's 'heart' while the work areas, i.e. Panjab University (Sector 14) and the Industrial Area (located at a distance, south-east of the city parallel to Sectors 19, 20 and beyond) have been called the two 'limbs'.
Although Le Corbusier chose to leave out the unlucky number 13 from the city plan but he still retained it in an interesting manner. Let me share this anecdote with you. If you add the numbers of two adjacent sectors in a column, you will get a sum that is either 13 or its multiple.

P.S. The basic layout has been changed to accommodate the exception (of Sectors 1 and 12).
With time, new sectors were added to the city and the city expanded southeastwards towards the Industrial Area and southwards beyond the National Highway 21 (known as Dakshin Marg, i.e. South Avenue locally) under the second phase (Sectors 26-47) and beyond that too (Sectors 48-56).
However, along with this growth in area, the city has also seen growth in the living standards of its citizens. The city has the highest per capita income in India. While certain surveys claim that it's citizens are the 'most brand conscious', other statistics put the city amongst highest in telephone density and per capita vehicular ownership.
As Times Magazine notes, "Today, the city is threatened by its very success, as Indians have been lured here in droves by its relatively high living standards and high percentage of greenery. An old vision of modernity is being replaced by the latest model: IT companies, theme parks, health hubs, golf courses and too many luxury cars."
Within last two years, the city dwellers have also started experiencing traffic jams, something which hitherto seemed alien to us. However, so many things are still the same. You can instantly plan a dinner at a restaurant at the other end of the city and you'll be back home with an overflowing belly within just an hour and a half or so.
If you happen to have the dinner at Sector 17 Plaza, by the time you come out of the restaurant, you'll be surprised to experience the silence of a graveyard in the place which is a sorts of mini-Connaught Place of Chandigarh. The night falls really early here and as such, irrespective of the newly opened multiplexes on the city outskirts and the Night Food Street, there is not much of a 'night life'. For some it may be appalling but for me that's the beauty of my city.