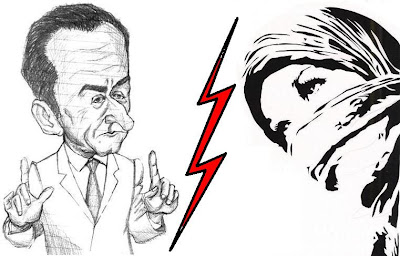 An ELian view
I was in no mood of writing a post right now. However, I am writing it as a response to one of my friend's post where he has supported French President Nicholas Sarkozy's stand on banning of burqas for Muslim women within the 'territory of the French Republic'.
First of all, I'll give my personal view which is in conformity to Sarkozy's view. To make my job easier, I'll just borrow his words.
"[W]e cannot accept that women be prisoners behind a screen, cut off from all social life, deprived of all identity... The burqa is not a religious sign, it's a sign of subservience, a sign of debasement — I want to say it solemnly..."
Well said Monsieur Sarkozy as long as this is your personal view. However, as the President Sarkozy, you should have shown some more restraint and responsibility.
I firmly believe that any kind of social reforms should be endogenetic in nature, i.e. from within the community. Only then can it be acceptable to the community at large. Exogenetic reforms, i.e. those enforced from outside can only lead to resistance.
Burqa or no burqa should be decided by the Muslim world. As I already said that personally, I do not favour it. However being a non-muslim, I can only criticise it and that too in a polite manner only.
What should Sarkozy do?
However, being the incumbent of the position of ultimate responsibility in France, Sarkozy has no right to air his criticisms in a high profile speech (He was speaking to the lawmakers in the historic chateau at Versailles, somewhat analogous to Indian President's address to the Parliament). At best, he can get together the Muslim community leaders and discuss the issue with them. If he thinks he has the ability to convince his fellow Frenchmen on the other side of the faith, he should talk directly to them; not enforcing any reforms from above but generating such conditions that those from within strive for necessary reforms.
This can be done by nurturing the moderates within the community and supporting them to come forward against any ills within the practices and beliefs of their community. However, utmost care should be given to the fact that such an initiative does not turn into yet another propaganda which further fuels the 'clash of the civilizations', hence having both domestic and international ramifications. Moreover, while doing so, the orthodox sections should not be totally ignored but kept in a good humour. However, if they show 'illegal' resistance against the initiatives of their moderate brethren, then legal machinery of the sate can be used against them.
Let us talk of India.
Who abolished Sati in India?
Officially it was William Bentick, the first Governer General of India, in 1829.
Does that mean this reform was exogenetic?
No, it was not. British were never interested in alienating Indians by disturbing their social structure. Their interest was only economic in nature.
It was Raja Ram Mohan Roy who forced the British Raj to bring these reforms by his continued efforts since 1812.
Same goes for all other social reforms (maybe with an exception or two) that took place in British India. Britishers only gave the legal seal to issues which were brought forward by the Indian Reformers.
I am not against reforms. However, being a self-proclaimed Empathic Libertarian, I am against their 'unempathic' implementation.
Hence, when a person like Sarkozy questions the Islamic practices in public, he alienates his Muslim citizens, even some moderate ones. Being the President of the Republic which gave the world (and India) the ideals of Liberty, Equality and Fraternity, he should be careful in interpreting these ideals in the right context.

Vipul,on three different posts onthe same subject i have expressed my views.I have started liking Sarakozy.He is not a hypoctite like us and has a mind of his own.To or not to Burkha,just leave it him to sort out with those concernrd.I am sure this subject is getting more attention in India than in France.

Vipul hopped on to your post from Sm's post on this issue and you are bang on with your logical analysis and when you read Sm's other post about French Law and Religious Policy its becomes more clear that the President should not take sides on any religious issue....
You have very correctly said that as a Individual whatever he said against hijab is quite right and should be appreciated for it but it is French Muslim women who have to a call on this issue and not the state as I know some muslim women here in India who took up hijab themselves without any pressure from any quarters...
Lastly whether Hijab is "evil" or not muslim women should decide ...

World is a small place chowlaji:)
2day wat happens in France cn take place in India tomorrow. Issue might be different but policy might be similar.
Anyways, i myself appreciated Sarkozy for his personal view but when a President takes such stand publicly, I doubt his intelligence. It will be counterproductive if ppl see shades of "the white man's burden" in his words. Here the problem is complex with intermixing of religion and race.

Vipul nice picutre.
Why i have written on this topic you have correctly said what is today happening in France,will happen in India tomorrow or day after tommorw but i am sure it will happen.

Vipul my question is do you belive that we are all equal people.Our blood is red.God is one so why dont we have right to speak for betterment of muslim brothers and sisters.
God really exist or not is different question.
“The time when you need to do something is when no one else is willing to do it, when people are saying it can't be done.”
This is what Sarkozy is doing.

Sorry mate neither u nor I know what and why Sarkozy is doing this. U c a messiah in him, I c an irresponsible President. V both hav our right of interpretation.
This said, I agree we have the right to speak for our muslim brothers nd sisters, i supported Sarkozy's persnl view nd said v cn critise wrong customs.
Bt v hav 2 b careful about their feelings. Let thm cum fwd thmslvs, support thm if they r stopped by the extremists within their rank bt let thm speak up 4 thmslvs.
DO NOT PATRONISE THEM. Its equivalent to looking down at thm irrespective of the fact tht u r actually thinking about the bettermnt.
They r best judges of wats gud nd bad 4 thm. show thm d way if u may bt dont enforce anything!
nd yeah CHARITY BEGINS AT HOME..
so lets first set our own house right, try 2 remove the ills which r creeping in our religion.
Only thn set out to preach others.