Two years ago, on the 30th of May, I arrived in Delhi to start a new innings of my life after completing my graduation. I was there to start my preparations for civil services. This is the second post in the series of three where I am reliving those initial days by reproducing the diary entries I made on those days. 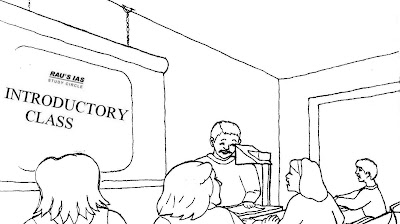 I had totally forgotten this diary of mine, till I found it lying in one of my book shelves some days back while finding some pages for rough work for a cousin. Flipping through those pages gave that intense feeling of deja-vu. I thought it would be nice to blog it. Please read the first post before continuing further.
Here I reproduce my third diary entry.

Hello there,
The month of June has begun and with it began my coaching classes. I was up at half past five in the morning. The sleep was irregular, waking in between a couple of times.
We had our breaf breakfast and left for Rau's at around quarter to seven.
The first class was that of Public Administration. Our teacher Mr. Maj Manoj Sharma took us through on a ride thou through the 'compact' syllabus.
This was followed by Khan Sir taking our G.S. class. A humorous person by nature, he gave us tips and suggestions on G.S.' preparation.
Back at Nirman, we had lunch, I had a good two hour sleep, then tea followed by a stroll and a little shopping with Arun.
Today the food was much better. Both rajmah in the afternoon and dal at night were not watery as yesterday. As a guy commented about yesterday's dal; 'It was like earth, 80% water and rest...'
And of course, All Aloo paranthas in the morning were also tasty. Tea served here is really good. God knows why am I making so many spelling mistakes today!
Maybe I am tired and need a sleep. Or maybe, sweat is making my fingers slip over the pen.
Ahead lies a lot of hardwork and I must prepare myself for it. What better way to do so than sleep. In Khan Sir's words even six hours sleep is a luxury. I beg to differ as I have been sleeping twice that time and cutting down by half is not that easy.
Anyways, time to sleep right now. What a luxury it will be under this fan!

Sitting in my air-conditioned room right now, I wonder how I managed to survive those days. At night to keep my room a bit cooler, I had to open all the windows. But these open windows welcomed all kinds of insects. My room was burgeoning with a zillion species of them, most of them I saw and got stung by for the first time in my life. Once I had to live with a swollen eye for a week or so which looked pretty ugly and was painful at the same time. At other times I got rashes on my body which itched badly.
My pet song those days was-'tadpaye tarsaye re, saari raat jagaye re, pyaar tera- dilli ki garmi'. (I hope you remember semi-clad Amrita Arora dancing on the original song from some forgettable Bollywood flick.)