Followed by some food for thought 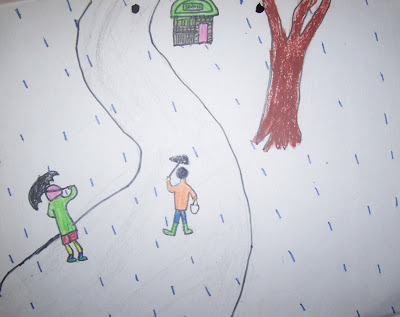 With the maximum temperatures hovering above 40°C (104°F), Chandigarh has been eagerly awaiting the advent of the monsoon. The showers we got on the 16th of June were, as later revealed by Meteorological Department, due to western disturbances and not pre-monsoon showers as I mentioned in a post that day.
The monsoons have always been a child's paradise. I fondly remember bathing in my balcony under the natural shower and those paper boats which my father used to make for me so that I could float them in the puddles on the road.
Doesn't that remind you of the first verse of a particular song, immortalized by Jagjit Singh's unique baritone:
यह दौलत भी ले लो, यह शोहरत भी ले लो;
भले छीन लो मुझसे मेरी जवानी।
मगर मुझको लौटादो बचपन का सावन;
वो कागज़ की कश्ती, वो बारिश का पानी।

Here's an amusing but apt translation from my side (try singing it to the original tune;)
Take this money and take this fame;
Even snatch my youth if you may.
But give me back my childhood's monsoon;
That boat made of paper, that water of rain.

Before you accuse me of filling my post with someone else's creation, I'll reproduce two poems, I wrote long ago. Yup, the two are from the same childhood collection from which I have posted last time and earlier too.
I remember writing the first one for a home assignment. I was finding it pretty difficult but suddenly it started raining. I went out in the balcony and started writing. The words just flowed naturally after that.
The sun was invisible and the clouds turned black
At that time I sensed, that monsoon has commenced
The drops of rain trickled down, making the sight beautiful
Happy were the people of town, before who were mournful
Peacocks started dancing and the frogs crocked with happiness
God blessed the burning Earth as for her it was a new birth
Monsoon is the King of seasons, to say this I have many reasons
Rain is the love of God, in disguise of the water drops
After this cute little poem, here is another one, but this time in Hindi. Well, there is no anecdote related to it.
सोंधी सोंधी खुशबू आई, मन में एक तरंग जगाई।
टप-टप-टप बरसा पानी, यह है प्यारी वर्षा रानी॥
सब के मन को स्वछन्द यह करती, ठंडी करती तपती धरती।
तरस विधि को धरती पर आया, देवराज द्वारा पानी बरसाया॥
तालाब पर यह छम-छम करती, सबके मन में खुशी है भरती।
किसान नाचें, पक्षी चेह्चहाएं, मोर नाच मोरनी को बुलाएं॥
खेत फिरसे हैं लहलहाते, हरे-भरे पोधें हैं भाते।
बच्चे कागज़ की कश्तियाँ बनाते, फिर उन्हें पानी में बहाते।।
वर्षा बड़ी सुहावनी है लगती, कोई ऋतू ऐसी नहीं होती।
The two poems are so similar in the spirit as well as structure that both can be regarded as each others translation.
In these two poems my affection towards monsoons has been expressed quite succinctly with the childhood's innocence. With time, I believe this affection goes down as rains become more of a nuisance for us. Afterall, who likes to get drenched while going to the college on a bike or get late for an exam or maybe, a date.
The biggest evil of rain for an average Indian, young or old, is when a much awaited cricket match gets abandoned due to it or India is defeated thanks to the bogus Duckworth-Lewis formula (though when the result is in our favour the same formula becomes the lifesaver).

On a serious note:
Well, we might change, our priorities might change and hence, our love for monsoons might change but let us hope that monsoon never changes. Sadly, it has changed its trend over the years and is becoming more and more unpredictable.
The havoc created by monsoons in Mumbai in recent years is fresh in our memories. On the other hand, this year, it has arrived much later than what was projected by MET Department and it is expected to be stunted in duration and rainfall.
This year's late arrival has been largely attributed to El Nino; a global periodic ocean-atmospheric phenomena that arises in tropical Pacific due to over-heating of the ocean waters and leads to the weakening of high pressure over the Indian Ocean which in turn weakens the South-West Trade Winds that bring monsoons to the low pressure belt of Indian Subcontinent in summers.
However the role of Global Warming, though not authenticated as yet, in bringing about a change in the general trend of monsoons in the recent years, can not be ignored.
The late and stunted monsoons directly impact the Indian economy negatively, at the macro level. Moreover, at the micro level, it negatively affects the livelihoods of thousands of farmers, dependent agricultural labourers and those associated with the agro-based industries and the auxiliary services throughout the country.
Such a scenario makes it all more reasonable to fight Global Warming with much more vigour and zeal.

Your site has won a Blog of the Day Award (BOTDA)

Thts gr8..
Thnx, will wait for the announcement!

Vipul,congratulations,you have made it.My best wishes for winning the award and forget the rain for sometime to enjoy even if it is 40c

Thnx chowlaji bt its vry difficlt to enjoy in this heat:(
Each successive day happens to be the hottest day of the year!

vipul congrats.
thanks for making changes.
i like your this post,song is great.widget is like sone pay suhaga.

thnx buddy.. thought of giving my readers a treat for ears too:)