An Innocent Ode to a Great Sacrifice

This day, a decade ago; India finally declared victory in the war which was imposed upon it by unscrupulous elements across the western border. Those fighting under the garb of Kashmiri grievances were shown the way back to their country or sent directly to heavens. As we celebrate the tenth anniversary of Kargil Vijay Diwas, I dedicate an innocent ode to the life and sacrifices of those brave men who never returned from the battle front. 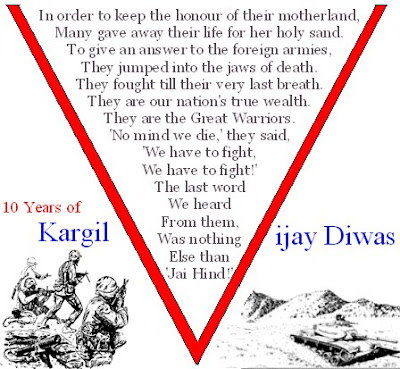 This poem is again from my childhood collection from which I have posted earlier too, written much before the Kargil War. Seeing a NDTV documentary couple of hours ago, where Barkha Dutt relived those moments with her fellow crew men and officers she had met during Kargil War coverage was pretty emotional. Late Capt. Vikram Batra's identical twin Vishal Batra while talking about his brother could not retain his tears. Before leaving, here is one of my favourite song from the movie LOC-Kargil;

Images Courtesy:
Self designed with images from http://www.au.af.mil and http://www.globalsecurity.org (edited)

An amazing, poignant ode to our war heroes!
Jai Hind!

"Many gave their life for her holy sand", beautiful sentence man!

Good post!
As you said, what can we tell other than "Jai Hind!"


Btw, I have officially entered writing fiction today, please do drop by and check it out!

wow.. nice one to remember our real life heroes...

Dude!
I have posted a reply to your comment in my blog!
Do check!

Vipul,there are already five posts on this subject.My submission is only one.
Our president being the supreme commander did not really come up to address the armed forces.
I fear, very soon the youngsters will refuse to join the forces.
It is a sad day.

thts true chowlaji.. atleast PM/ president or for tht matter Defence Min shud hav been thr at Kargil on 26th. bt thn thy mst hav been tired aftr being gud hosts to Hillary Clinton.. its sad indeed!

A heartfelt yet poignant ode to our martyrs and war heroes!