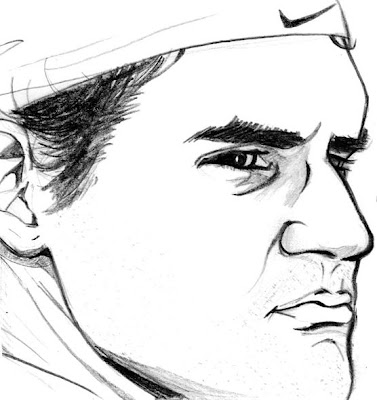 What a Game of Tennis it was!

After sweating it out well above 4 hours at the Centre Court, the moment being awaited by this man and millions of his fans around the globe, came at last. Just as Andy Roddick lofted the ball out of the court, Roger Federer bacame the first man in the history of the game to have won 15 Grand slam titles. By doing this he surpassed the record of Pete Sampras, who was sitting amongst the audiences, having flown across the Atlantic for this special match.
I switched on the T.V. when the final set had already started. Swapping the channels between Star Sports and Star Plus (where IIFA Awards were being telecasted), I finally settled for Sports as Federer and Roddick took the game down to the wire.
However the wire was no where to be seen as the final set went on and on. 30 games were played in that single set, enough for a Men's singles and a Lady's singles match to get over with 6-0, 6-0, 6-0 and 6-0, 6-0 figures respectively.
In the end, Federer showed who has more nerves as he finally broke Roddick, for the first time in the whole match to win it 5-7, 7-6, 7-6, 3-6, 16-14; that final set being an epic in itself. With this Federer also regained his Wimbledon Title which he had lost to Rafael Nadal, last year having won it 5 times in a row before that.
It seemed as some kind of a Divine intervention, as due to injury, the defending champion decided to bow out of this years Wimbledon. In the French Open too, last month, Nadal lost to Soderling in early stages to give Federer a better shot at the title on the clay court, the absence of which was acting as a blot on his magnificent career. Federer won it to come at par with Sampras' 14 Grand slam titles and now with this win, he is on the top.
Moreover, he is back on the top of the rankings table too, once again the World No. 1.
However, the man who made this win even more special was his opponent, Roddick. He was having a great tournament and looked all set to spoil Federer's dream. He made Federer work real hard for the win and brought out the true champion in him. In all, Roddick won 39 games against Federer's 38 and lost both the earlier sets in Tie Breakers while winning them cleanly without a tie. Ironically before this match, the two had faced 20 times where Federer leads 18-2, never allowing the game to enter the 5th set.
Today, both the players kept their nerves in the final set serving beautifully but facing the serve real badly as the spectators like me lost their nerves at the sight of this never ending saga. Each game had a competitive start but just as it seemed that any one of them will be finally broken, he brought out some great aces and first serve wins to write the game against his name. Finally, Federer took Roddick's service game to Deuce and got his first and the last Match Point in that 30th game of the final set. Thereafter, the history was created.
For those who had written off Federer due to his disastrous 2008, this came as another apt reply after the French Open win. I'll end the post with some status updates of my friends on the Facebook.

Ann Jawn: Thanx Roger Federer for showing us all what GREATNESS looks like.
Saahil Harjai: FED EXPRESS is BACK !!!:)
Rahul Kadian: And the Champ is back
Japjit Singh Sawhney: Ole Roger!... The New World No. 1
Siddharth Sehgal: All Hail King Federer...15 Grand Slams...

Yes! Andy walked on water yesterday... well, almost. His serve deserted him towards the end... when it mattered the most.

Federer just managed to hang in there and stave him off... most of the time.

Andy too has gone down in history. This should make him more determined... in future.

Fedex is a changed man... barely 2 months ago... he was a very diff. man, indeed. That is the twist of fate!

Most folks wrote him off as a "spent force" already... and those very folks are now falling over each other to eulogise him.

Really, "victory has a thousand fathers, defeat is an orphan"... how very apt!

well, federer got wat he desrvd! though injury of Nadal gives us a chance 2 wndr, wat if he was playing; but this cant take away anything frm Federer nd his greatness.

Despite the fact that until sometime ago they read - "roger roger roger" and the likes! :-)

Yeah thts true! Roddick was the hero as he brought out the true hero in Federer! Or u may say, he filled the void left by Nadal's absence!

That was some match...i kept thinking that Federer would finally crack as Roddick serve is thought to be better, but Federer kept getting ace after ace....Federer now won in Cincinnati, he's on a role. Hope Nadal plays in the US Open.

Yeah, one hell of a match it was.. One wud hav xpctd a Federer-Nadal match of this kinds bt Roddick totally justified d hype around him!
Nd definitaly, Roger is on a roll now.. lets hop Nadal is back soon 2 giv him sum stiff competition..
Hey apurva, thnx 4 dropping by:)