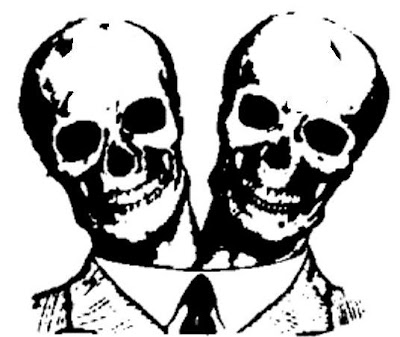 "A polarized city isn't necessarily a bad thing for a politician. Black or White."

These words are spoken by Marty Kaufman1, a character in Barack Obama's 'Dreams from my Father' (the book I am reading these days), in context of Chicago of early 1980's.
However, isn't this statement true for the socio-political nexus of any place at any given time? Lets take a proximate example, that of India. Here the 'Black or White' can be substituted by 'Hindu or Muslim', 'Upper Caste or Lower Caste', 'Outsiders or Native' or by any such polarization and we are instantly reminded of the politicians and parties which made the best out of it.
Its not necessary that in a society polarized into two groups A and B, the politician has to be the member of the group A to win its loyalty. Even a pseudo-support can do. However, even if the support is genuine, it cannot be denied that the polarization helps him to create a vote-bank.
It is hard to find a much needed polarization along the lines of political ideology and we end up having elections fought on the platforms of Hindu Rashtra and Marathi Manoos among others.
Moving back to U.S.A., they have elections fought between the Democrats and the Republicans on the broad issues like 'for/against gay rights', 'pro-choice/pro-life abortion laws', 'progressive/regressive taxation', 'diplomatic/belligerent foreign policy' and 'gun-control/gun-rights' respectively. However, these issues remain epidermal and on seeing beneath, one can notice clear polarization based on socio-economic conditions.
So, while Democrats have a huge support of Black and Hispanic populations; the main-stay of Republicans are Whites. However, within Whites too, while religiously orthodox and the richer sections stick to Republicans, the educated liberals and lower-income voters converge towards Democrats.

However, who is to be blamed for this polarization, Politics or the Society?
It is like asking, "Who came first, the hen or an egg?"
Polarization has always been there, thanks to 'God' and 'Men' alike. So while God2 decided to send his creations to the Earth in all sizes and colours, susceptible to polarization; His creation, the Men decided to compartmentalise themselves further on the basis of their belief system, occupation, birthplace, etc. This polarization is itself an act of Politics3, i.e. the competition between individuals or groups for power and leadership.
With time, Politics, i.e. the art and science of winning and holding control over a Government, was born and it very conveniently clung to this already polarized society like a parasite4. So while it fed upon it to prosper, it used all the resources available to aggravate the polarization and hence kept feeding itself and prospering in turn.
However, why couldn't the Society remove this parasite and throw it away? It was because the various sub-systems of the Social System like religious factions, economic groupings etc. benefited from this politics of polarization while the overall Social System degraded.
This is an ideal antithesis to the principle of Synergy5 where 2+2 becomes -5 instead of 5.
So Society at large allowed the Parasitic Politics of Polarization (the 3-P's) to prosper while some concerned individuals and groups sulked.
Continuing with this symbiotic6 analogy, we have an ideal example of Mutualism7 in politics of polarization too. It is the recent election drama enacted in Pilibhit constituency of Uttar Pradesh. While Varun Gandhi, the BJP candidate tried to garner Hindu support through his shameful vitriolic against Muslim brethren, the BSP government under Mayawati went overboard and booked him under N.S.A. to gain the appreciation and votes of Muslims. However, this turned out to be an antithesis to mutualism as Congress, another pesudo-secular party turned out to be a net-gainer in U.P.
Sadly, the distasteful concoction of these 3-P's seem perpetual. However, education can act as a great tool to erase polarization from an individual's mind and hence check the further degradation of Society at large. One hopes that a day comes when the reverse process of depolarization begins. However, to hope that this polarization will ultimately end one day is nothing but wishful thinking. Nonetheless, a dose of Empathic Libertarianism will definitely help.

this was the case too, with the centre and the left, a few months back ... as a result of which, the Left could safely cling onto Bengal and the UPA dared not antagonise them lest they lost their support at the centre ... thankfully it's all become "right" now :D

good insightful write-up... in other words "clear headed" yet again!

Thanx subhayan:)
The example u giv is the one of mutualism in politics though i fail 2 see any polarization(of society)in it..