Temptations of an Empathic Foodie

Ciao (a hello in Italian)
As you know, this is my 51st post. So, I thought of coming up with something new. For all those who come here to read some 'clear headed' analysis of social and political issues, or my 'witty' take on the life of people around me, or my highly philosophical stuff which sometimes surprise (read bore) even me, this may come as a shock!
In my bid to diversify, I am going to serve you something new; something that will tempt you, titillate your senses, and hopefully in the end, satisfy your appetite to the full as it did mine.
I present to you the Bo-Veg Cheese Pasta from the kitchen of none other than, the great Italian Chef Lupiv Revorg (just read the name backwards to decode the actual desi chef). 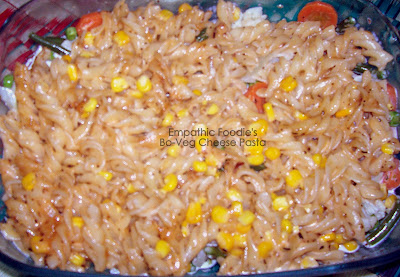 It is basically a combo-meal, a two-storey combination of healthy Boiled Vegetables and unhealthy Cheese Pasta, the former cancelling out the harm caused by the latter. An ideal empathic cuisine, indeed ;)
First of all lets prepare the first storey of the cuisine, i.e. Boiled Vegetables in Mayonnaise Sauce. As the name suggests, you need
First boil or steam the chopped vegetables. Add some salt while boiling.
Meanwhile, in the dish in which you will be serving the cuisine, add mayonnaise and milk. Stir them with salt and oregano to make a thin sauce. Once, the vegetables get fork tender, drain the water and add them to the sauce and mix well. Now spread the vegetables evenly in the dish.
The first storey has been laid successfully.
Now, lets come to the next part, the unhealthy one. For Cheese Pasta, you need
On a heated non-sticking pan, add two tablespoon of butter. As it melts, add the boiled pasta (boiled as per the directions given on the pack). Stir them for some time over the heat. Then add American Corn and the three spices mentioned in the end. After stirring again for some time, finally add the grated cheese (heaven on the earth). Don't allow the cheese to stick to the pan or get too sticky with the pasta. So keep stirring and add milk and cream. Finally add tomato ketchup, stir well and let the contents to simmer.
Once done, empty the Cheese Pasta evenly over the Boiled Vegetables and serve hot, ideally to 2-3 persons. If you prepare both the dishes side by side, then you should not take more than 45 minutes in the whole process.
To save the effort made in the second part, I may suggest you to go for Maggi instead of Pasta. That was what I did, when I prepared this cuisine for the first time. However, do add tomato ketchup, one tablespoon of cheese spread (for each Maggi cake) and some salt and black pepper while preparing it.
Bo-Veg Cheese Pasta goes best with Garlic Bread (preferably the oregano flavoured) micro-waved with a hint of cheese for two minutes. And of course, to wet your tongue keep a pitcher of Coke or try out Catch's new sugar-free flavoured soda.
Bon Appetit! (now translate it to Italian by yourself; and yeah that's in French, means good appetite, i.e. have a good meal:)
Image Courtesy:
From Personal Collection (edited)
Author: Vipul Grover at Saturday, July 11, 2009

WOW WOW happy happy ... shall ask my mum to treat me to this before i go off to BITS :D ... my mum has a kitchen blog too: it's on krishnokolee.blogspot.com

Looks like have to try it as a Sunday Breakfast :) though Sunday is a strict non-veg day but this one looks tempting...Thanks !!!

Probably will try this one day as I like pasta a lot. Hope it is as good as it looks. (it looks really yummy). And nice meeting you Mr. Lupiv revorg. come more often may be with an Italian Pizza next time.

@Dhiman Well never mind, add some chunks of chiken(Marinated, shreded and grilled for some time) to the pasta in addition to corn, and u'll have a non-veg Bo-Veg Cheese Pasta.. lol, wat an oxymoron:)

@BharathiThen it will be pizza the nxt time 4 sure:)

A Yummy Diversification!
Will try it out sometime...better still, will ask the chef of our home to do the needful! :)

Hey, shilpa, frankly speaking, it might not turn out 2 b tht tasty bt wn made by urslf (moreovr in my case, evn conceivd urslf), it tastes yummylicious:)
so no chef or maharaj, jst gt in2 d kitchn nd make it urslf;)
Or u cn request 4 the services of Lupiv Revorg for sure.. lol

It seems it is becoming a fashion to add the word ITALIAN as much as posible.
I read somewhere that the Britishers were very fond of such acts.Good to see,we Indians,are still following the old teachings.

Chowlaji i believe u r getting a bit judgmental here..
Though this dish has been conceptualised by me bt it is out nd out ITALIAN if u c both Pasta nd Boild Veg. individually..
If it were some take on chana bhatura or sarso ka saag, i wud have added PUNJABI as well.
I believe tht wont make me Regional either.
I hope u got d context:)

Mr.Lupiv Revorg,
I have been amazed by your cookery skills, thanks to your guest blog through our Vipul Grover's blog. Funny that a man like you coming and and posting such a weird recipe on an Indian blog in the Italiano way!

I must say that than the actual cumbersome process of making the recipe, the pre-recipe intro was far better and that was enough to feed our mind with enough humour to clean our mind for few hours!

Will try out your new recipe, when my mother is busy, please do pray that she doesn't catch me cooking this stuff and furthermore please pray that I wouldn't fry this marvel recipe!

N.B: Vipul, this is the same Pawan, who posted the detailed comments thingy on your blog a month ago, as a man of my word, I am going to leave my presence all over your blog today!

Anytym mate!
Blogging is a unique space where we can learn mutually as you just mentioned in my comments section. Writing humor has always been my weakness and I think I can take enough lessons from you!